Water rights are most commonly assigned according to prior appropriation, a queuing system summarized as “first in time, first in right.” Another water management method, water trading on the stock market, however, is deemed to be a more efficient way for water allocation. Water trading is recommended as it not only improves market efficiency but also alleviates water scarcity and insecurity amid more frequent droughts as a result of climate change. The socio-economic, as well as environmental benefit of water trading is therefore worth discussing. Here, we take a look at how the water trading market works, using the development of water trading in Murray-Darling Basin (MDB), a crucial water catchment in Australia, as a case study.

What is Water Trade and the Water Trading Market?

When water rights are freely traded between end users, a water market is thus developed. The market price of water reflects the resource’s demand and supply, and may be different across regions and types of rights. Prices will change in response to any fluctuations in supply and demand. Consider a situation where drought is persistent and water is, therefore, low in supply, the price of water would presumably increase. Motivated by the high price and a higher economic incentive, sectors or industries that are less water-intensive may sell or trade their excess water to those more water-intensive businesses that are facing shortages. The market mechanism of water trade thus allows scarce water resources to be allocated in accordance to the highest valued usereallocating water from low to high valued uses to encourage efficiency gains. The economic incentive of water trade also promotes water conservation and discourages over-irrigation or overuse of water, as the saved excess water can be sold while paying is required when there are water shortages.

Water trade reallocates water to those who value and demand water more, improving market efficiency and water conservation. This efficient and effective water management method could therefore be significant in areas where drought and water scarcity are severe. Australia has been practicing water trade since the 1980sand will soon extend its water trading market to the Murray-Darling Basin (MDB), bringing both positive and negative social, economic, and environmental impacts to the area. 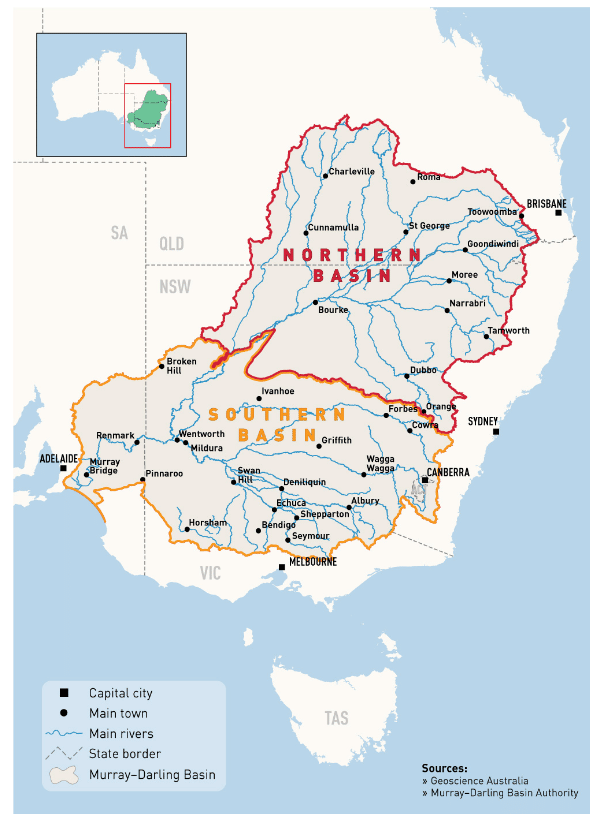 The Murray-Darling Basin in Australia

MDB is Australia’s largest river system, made up of 22 major catchments, with 40% of all Australian farms located in the basin. Socio-economically speaking, it supports 7,300 irrigated agriculture businesses and is home to 2.3 million people, while producing AUD $ 22 billion worth of food and fiber every year. Ecologically speaking, the basin has a diverse and delicate ecosystem, housing 120 waterbird species, more than 50 native fish species, and 16 internationally recognized and protected wetlands. Without a sustainable water supply, it could potentially devastate both the local economy and the environment of the MDB.

Extreme climate and drought have added uncertainty and fluctuation to the water supply of MDB. It is observed that the average winter rainfall has reduced in southern Australia, while overall temperatures across the country have risen in the last 20 years – the average temperature is forecast to increase 0.6 to 1. C by 2030, MDB has been hugely affected by climate change; it recorded its worst drought in over a century in 2019. A decrease in water supply from drought, together with an increase in water demand prompted by an improvement in living standards, and a rising in population, continues to add pressure to the water security of MDB. An efficient water management system is thus essential to the MDB in times of persistent drought. 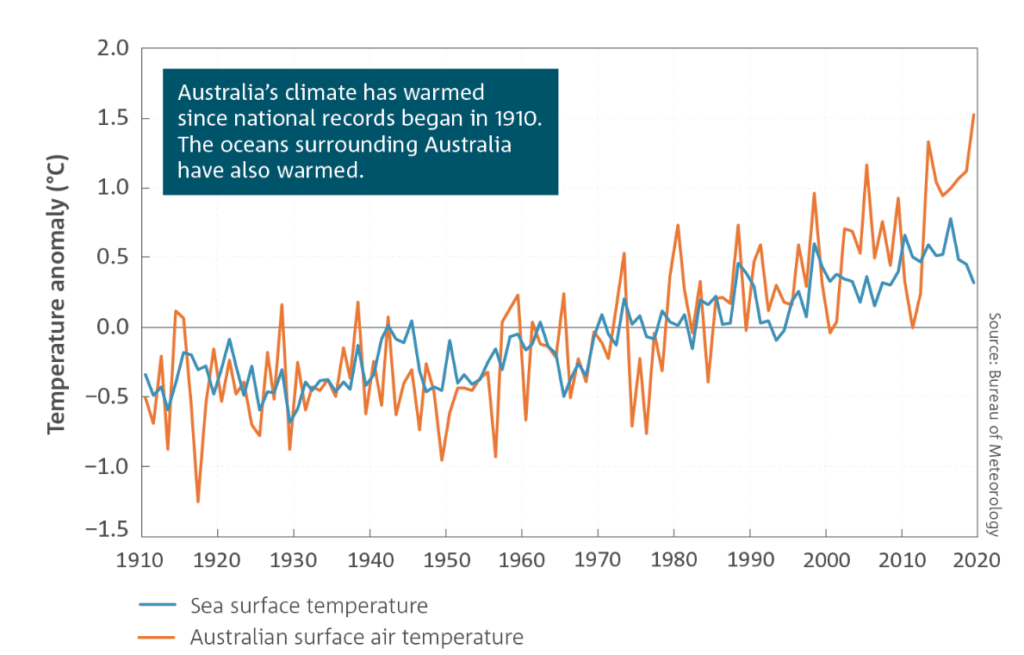 The Water Trading Market in the MDB

Water trade has been in practice in the MDB for its efficiency in water allocation. MDB is the most active water trading market in Australia, accounting for 97% of all allocation trade and 77% of all entitlement trade in 2016-17. The average water market turnover for the basin in the last decade is nearly AUD $ 2 billion per year. Traded water is used primarily for agricultural purposes, used for products such as cotton, cereals and pastures. 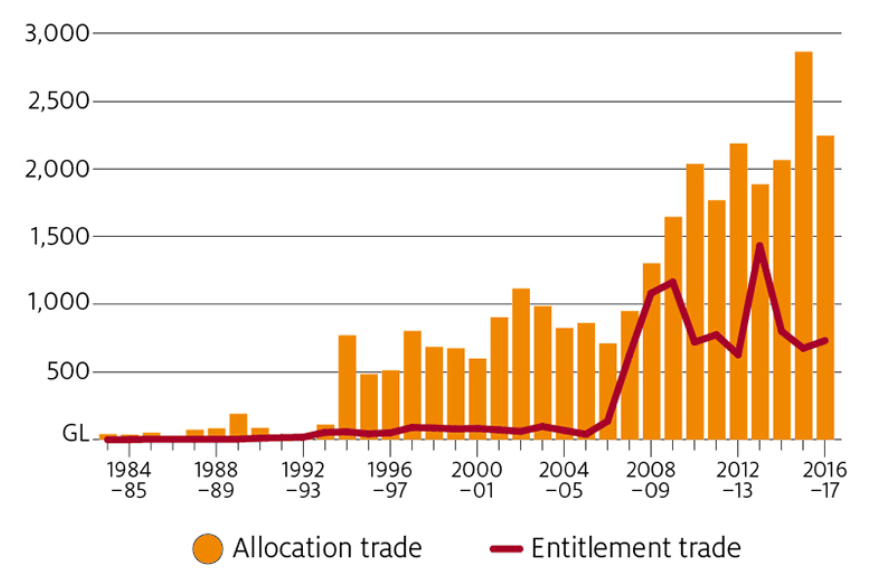 Annual volume of water trade in the southern MDB, 1983-84 to 2016-17. Source: Department of Agriculture, Water and the Environment (ABARES), Australian Government

Water trade has brought both positivity and negativity to the social, economic and environmental aspects of the MDB.

In regards to its social impact, some are worried that water trade might lead to population and employment loss. Water trade might prompt farmers to leave the rural district, which would reduce local spending, leading to fewer employment prospects and a decline in social services. The loss of farmers may further induce the decline in council revenues and house prices. Out-migration of young people might result as well, affecting the local community. Yet, it is observed in a survey that many farmers stayed in their local area after selling water entitlements to the government. How the water trade affects the community in the longer term is still uncertain.

From an economic perspective, a generally positive impact is observed from water trading, contributed by the improvement of market efficiency. It is found that water trading in the southern MDB increased Australia’s gross domestic product (GDP) by AUD $ 220 million in 2008-2009, while in the 2006-2007 and 2010-2011 periods, water trade production was estimated to be AUD $ 4.3 billion higher than that without trade. The loss brought by drought also declined with the introduction of water trade, dropping from AUD $ 11.7 billion 2006- 2007 to AUD $ 7 billion in 2010- 2011 in southern MDB. Water trade therefore prompts a more optimal market, increasing social benefit and economic welfare.

However, the water trading market creates both negative and positive impacts for the environment. The salinity of water increases under water trade in MDB, upsetting the ecosystem of streams. Groundwater salinity levels are naturally higher in downstream southern MDB river sections. With water trade leading to more active farming activities, as well as a large movement of water to downstream areas, in-stream salinity further increases with more groundwater seepage to rivers.

On the other hand, water trade also facilitates environmental protection and water conservation. Without adequate water, the ecosystem is harmed, with the river system likely to face an increase in salinity and outbreaks of algae, causing loss of native animals due to destruction of breeding spots and food sources. Vegetation is also lost, affecting the food supply and shelter of native animals. A steady and abundant supply of water dedicated to the environment thus becomes essential. Environmental water is used to improve the health of rivers, wetlands and floodplains, restoring river health by delivering planned flows to where nature needs it. Under the water trading market mechanism, the Australian Government has conducted water purchases of environmental water. Between April 2015 and March 2020, it secured a total of 68,267.8 megalitres of environmental water, which is used to support the recovery of important native wetland and riverbank plants and help reconnect rivers in the Basin.

Water trading, although it could greatly improve market efficiency and social welfare, might still pose certain potential threats to society and the environment. Careful and attentive planning is needed when introducing and developing water trading. Regulation and intervention might be handy to limit the market. Other water management could also be used as a complement to water trading.

Investment has been the preferred new strategy for the Australian government in hopes to replace water purchases, which have been losing their effectiveness in recent years. The 2020 Murray- Darling Communities Investment Package injected AUD $ 2.1 million in 2022-23 for detailed development work to implement early actions to improve water markets. Water limits are imposed on water consumption, with sustainable diversion limits set, limiting how much water, on average, can be consumed in the Basin by towns and communities, farmers, and industries, while maintaining a healthy river and environment. Infrastructure development, operation and maintenance are also concerned, with dams, barrages and weirs being developed and built to regulate water flows. Compliance and regulation on water trading are enforced, with penalties imposed on law-offender. Evaluation and assessment of the effectiveness of water management, water trading included, should be formed regularly.

All in all, efficient water management will continue to be of utmost importance in dealing with more frequent and severe droughts under extreme climates. Water trading might only be a short-term remedy that could not reach and solve the entrenched cause of climate change. Countries that currently practice water trading, for instance, Chile, the United Kingdom, the United States – with markets in California and Arizona – should make good use of the short-term benefit brought by water trading, while continuously developing long-term solutions for the problem of water scarcity. Lowering our water demand by adopting a more environmentally-friendly lifestyle can certainly help to address the crux of the issue. Together with the act and support of the government on water management, our individual actions play a large part in achieving water sustainability.