AMMAN — Jordan is in full gear to increase the agricultural sector’s resilience to climate change as water scarcity, lower precipitation and rising temperatures are taking a toll on the field, where more than 70 percent of total agriculture is rain-fed.

Jordan contributes a negligible amount of emissions to the overall emissions. However, the water-poor country is particularly vulnerable to the impact of climate change, and many economic sectors are susceptible to the ramifications of climate change.

The agricultural sector, which employs hundreds of thousands and directly contributes about 5.5 percent to the country’s GDP, is one of the most climate-sensitive of all economic sectors.

Jordan’s total greenhouse gas emissions are inconsequential, with about 28 million tons of CO2, representing around 0.06 percent of the world’s total CO2 emissions.

The Kingdom, being the second poorest country in terms of water scarcity, has enhanced its commitment to the international climate change governance system by raising its macroeconomic greenhouse gases (GHG) emission reduction target from 14 per cent to 31 per cent compared to the Business As Usual scenario, according to the updated 1st Nationally Determined Contributions (NDC) document submitted to the United Nations Framework Convention on Climate Change (UNFCCC).

The Kingdom has a multi-pronged strategy and action plan to mitigate the implications of climate change that are based on optimally utilizing available water resources, introducing advanced agricultural technologies, training farmers, to mention a few, Minister of Agriculture Khalid Hneifat said in a recent interview with The Jordan Times.

“The impact is very evident on the agricultural sector, where the majority of farmers are small-scale farmers. Today our dams in the south are completely empty and temperatures are rising… farmers who live and work near the dams are suffering… The rainfed agriculture is suffering,” Hneifat said.

“Main crops require early rainfall and we used to get rainfall sometimes in September but over the past few years, we started to get rain in December if we were lucky…The erratic rainfall and its distribution and the frequent shift in the rainy season have harmed the farmers and crops,” said the minister.

Jordan’s Third National Communication on Climate Change expects a large impact on the agricultural sector. It predicts that increasing evaporative demand, owing to rising temperatures, could increase irrigation requirements by between 5-20 percent, or possibly more, by the 2070s.

The timing of rain, and intra-seasonal rainfall patterns are critical to smallholder farmers in Jordan. Seasonality influences farmers’ decisions about when to cultivate, sow and harvest. It ultimately contributes to the success or failure of their crops. Delays and below-average rainfall will likely have a negative impact on agricultural production, the report indicated.

According to the updated NDC report, all models predict a warmer climate with strong confidence in temperature increase.

By 2070-2100, average temperature increase could range between 2.1°C to 4.5°C. Projections predict a drier climate with medium confidence. In 2070-2100, the accumulated precipitation could decrease by a range of 15-35 percent, and the decrease would be more marked in the western part of the country.

All projections indicated a warmer summer, drier autumn and winter with medium confidence. The warming would be more significant in summer, and the reduction of precipitation would be more important in autumn and winter than in spring. For instance, the median value of precipitation would decrease by 35 percent by autumn of 2070-2100. The dynamic projections predict more heat waves. In pessimistic but possible projections, for a summer month, the average of maximum temperature for the whole country could exceed 42-44°C, according to the NDCs document.

The agriculture sector already consumes 50 percent of Jordan’s available water resources and water scarcity is the main challenge hindering the ability to increase the percentage of cultivated lands, said the minister.

Fully aware of the consequences, Jordan has early on started working across different fronts to mitigate the impact, including increased reliance on water harvesting in various areas across the country, introducing new technologies such as hydroponics and aquaponics, training farmers to plant less water-intensive crops and increasing zero-interest loans to farmers.

“We are training farmers on how to optimally use the water resources…This year, we plan to provide around JD40 million zero-interest loans to farmers, up from the JD35 million that we provided last year and will heavily focus on scaling up the use of hydroponic and aquaponic farming,” he said.

The ministry is also working on a major reforestation project.

“We will work on planting trees in areas that reach 10,000 dunums and we aim to plant one million trees from the south to the north. It is a sustainable reforestation project and we will use treated water,” the minister said, adding that the project will be implemented during 2022-2023.

Several projects are already underway or in the tender process to plant several dunums of land across Jordan using modern and efficient watering techniques to ensure the sustainability of the project, he added.

The water-intensive sector, which uses half of Jordan’s water resources, is “trying to make use of each single drop of water as it does not get all the water it needs”, said the minister.

Of its total water consumption, around 180 million cubic meters of water come from treated water annually. The ministry, in cooperation with various partners, is working on expanding reliance on rainwater harvesting.

Jordan is currently home to 168 water harvesting structures for agricultural purposes with a total capacity of 60 million cubic meters and work is underway to build 5,000 wells for rainwater harvesting in the western parts of the country, stretching from Irbid to Wadi Musa where precipitation is more than 200 millimeters, the minister said.

In the eastern and southern parts of the Kingdom, work is underway to build 60 water harvesting structures. Tenders have already been floated for the construction of 40 of these structures.

“This year alone, we will see around 60 water harvesting structures and wells operational and thus we will see a major change in the sector,” he said.

In 2023, an additional 100 water harvesting structures and wells will also be operational.

“No matter how small the quantities we collect, in some areas they have a great value and mean everything to farmers and livestock breeders,” he added.

The 50 percent of Jordan’s total water resources that the agricultural sector consumes enables the sector to produce 2.5 million tons on average annually, making it one of the highest in the world, said the minister.

In spite of the challenges facing the sector, Jordan enjoys self-sufficiency in several agricultural products and the sector’s exports reach dozens of countries.

“This is impressive in a country that suffers from water shortages,” said the minister.

“We can plant 77 million dunums of cultivable lands in Jordan, but our problem is the water resources. We are working on different fronts to meet Jordan’s rising demand and achieve food security,” he added.

According to the ministry, around 2.5 million dunums are cultivated in Jordan, representing around 3.25 of cultivable lands.

Protecting livelihoods of many

“When we talk about the agricultural sector, we talk about hundreds of thousands who make ends meet because of working in this sector. They are behind Jordan’s food security so we need to empower them as well,” he added.

According to the minister, around 260,000 persons work in the agricultural sector, 200,000 of whom are Jordanians, with the overwhelming majority being Jordanian families.

“It is small farmers and livestock breeders in rural areas that are the most vulnerable to challenges. We are working across different fronts to help them and ensure that they sustain their livelihood,” he added.

The country’s Third National Communication Report states that “the poor in rural areas of Jordan are expected to face the most severe consequences of climate change through disruption of livelihood options that depend on natural resource management. The expected impacts of climate change, particularly reduced agricultural productivity and water availability, threaten livelihoods and keep vulnerable people insecure”.

About 25 percent of the total poor in Jordan live in rural areas, depending mostly on agriculture — livestock keepers, smallholder farm households and landless former agriculturalists. In spite of rural youth’s apathy towards the agricultural field, it remains an important employer for rural communities, according to the report.

The ministry is also working on helping farmers with marketing their produce, he added.

“When we talk about this sector, we talk about economic growth and food security. It is among the government’s top priorities to enable the sector to withstand all challenges and help sustain the sector,” Hneifat said. 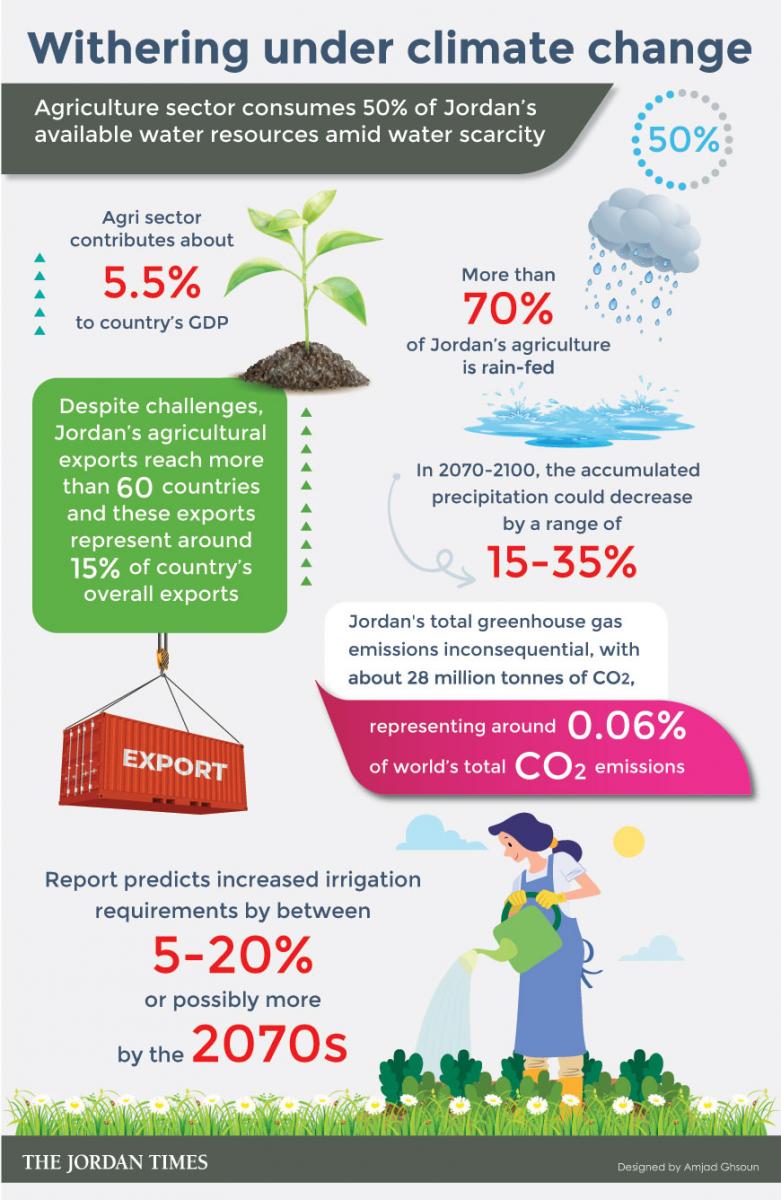