HOUSTON: This was a note on our calendars; the Houston audience had eagerly awaited this event. After a long period of virtual concerts, this was the first live concert under the auspices of Classical Arts Society of Houston, and it commenced the 2022 fall season. In the spirit of Azaadi Ka Amrit Mahotsav, CAS together with Samskriti, presented to a packed auditorium: leading Carnatic Vocalist, Sri TM Krishna; Akkarai Subbalakshmi on the Violin; and Praveen Sparsh on the Mridangam. It was a thematic concert, titled “Harmony of Our Languages,” intending to showcase Unity and the oneness in music from the diverse languages ​​of the subcontinent. 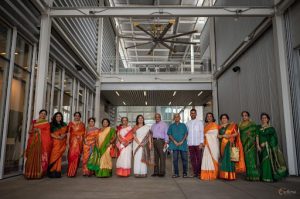 And what an evening it was! One just had to be there to experience it! Words cannot fully express the impact of this memorable concert and this article is a humble attempt to share some thoughts of the event. TMK has long stepped away from the traditional format of a concert – and his rasikas have come to expect the unexpected. His previous Houston concert in 2018 opened with O Rangasayee, catapulting us to Vaikuntam from the get-go. By contrast, in this concert, he put the audience in an immense calm as he began – in Shankarabharanam – The Preamble to the Indian Constitution, in Sanskrit. This evoked deep feelings of gratitude for the blessing of once being a part of something so ancient and relatively recent. Juxtaposed emotions were felt at several points during the concert. Following the unique opening, they segued into the grand Dikshitar’s Sanskrit composition Dakshina dialectputting us in a prayerful mood as we bowed to the Arch Preceptor, an embodiment of Ultimate knowledge and wisdom. 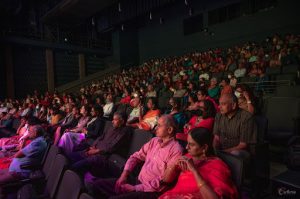 One of the main pieces presented was apt for the concert’s theme as it was the priceless gem from Nandanar Charithram by Gopalakrishna Bharathi Vazhi Maraithirukkudhae, which brings to light social inequalities. This was presented in the very Magnificent Thodi, a departure from the familiar Nattakurinji.

Following this, in Alapana and Thanam, TMK presented an interesting Medley of ragas – Kapi, Shubhapanthuvarali, Mohanam, and Desh. He then launched into a recently tuned work comprising Emperor Ashoka’s Edicts presented in the above mentioned ragas, each set to a different tala for the appropriate meter.

Sticking to the theme, he explored several more pieces in Bengali, Marathi, Hindi, Kannada, Tamil, and Telugu. One of the audience favorites being Sudhandhiram Vendum in Maand ragam by Perumal Murugan.

The stirring conclusion – Sri Rabindranath Tagore’s rarely-heard verses of Jana Gana Mana – evoked tender emotions in the audience, highlighting the Unity in diversity as we bow to Mother India. The poet’s Magical lyrics overlaced with Sri TM Krishna’s mesmerizing music brought the audience to their feet with thunderous applause.

The concert not only illustrated as promised, the Harmony of languages ​​– 9 presented in total including the ancient Magadhi Prakrit, but also music – intertwining Carnatic and Hindustani music, lyrics – from various composers, including the great Emperor Ashoka’s Edicts and many more diversities in the Indian subcontinent!

The artists excelled in their combined and Solo performances throughout the concert – the voice modulations of the vocalist building the sangathis to the higher octave with a strong, sonorous presence in Thara sthayi, impactful phrases and powerful and at times Poignant sangathis made the evening magical! Smt Akkarai Subbulakshmi embraced the vocal rendition gracefully and shone brilliantly during her Solo alapanas and swaras! The young Sri Praveen Sparsh played like a master on the mridangam with gentle strokes alternating with crisp and resplendent percussion that ebbed with the modulations and moods of the concert!

The understanding & Chemistry of the Team was palpable!

At the start of the program CAS President Nalini Sadagopan warmly welcomed an audience of music lovers, from both Texas and Louisiana. Nalini gave her thanks to: former President, Mrs. Prabha Bala for her continued help and guidance; the Board for enthusiastically restarting the 2022 live concert series; and the technical team at The Match, for superb sound quality.

This remarkable three-hour concert by TMK and team will be remembered for many years to come. It was powerful and prayerful; Unique and unifying; earthly and ethereal. — Sudha Mani, Abhishek Balakrishnan and Lakshmi Srivaths