SYDNEY, NS – No power? No problem. At least not for Levi Denny.

The Eskasoni resident was one of the hundreds of Cape Breton residents who purchased generators over the past few days in preparation for the arrival of hurricane Fiona.

“That’s it. got it Now all I got to do is get another jerry can for fuel and I’m good to go,” declared Denny, who had ordered the portable power supply unit a few days prior to picking it up at the Gillis Home Building Center on Kings Road. in Sydney River. 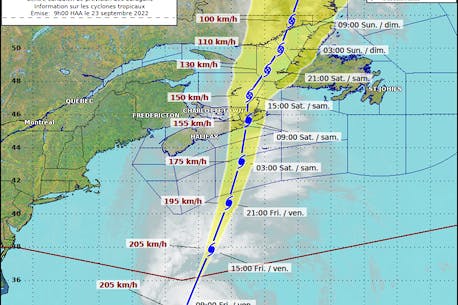 Ironically, while Denny was waiting to load his purchase into the back of his vehicle, a large transport truck arrived in the back lot. It carried 50 brand-new generators.

But even that emergency shipment could not meet the demand.

“Every one of those generators were spoken before they even got here,” said Steven Shibinette, who has worked at the building center for the past two decades.

“We could have had another 100 or so and I bet we still would have been sold out. The phone hasn’t stopped ringing. The calls have been coming in since Thursday morning at about 7 am”

Shibinette said generator units weren’t the only items flying off store shelves over the past few days.

“There’s also been a run on sump pumps, extension cords, flashlights, batteries and anything else that might be considered storm-related,” he said.

Power wasn’t the only concern of area residents preparing for what is being billed as possibly one of the biggest storms to ever hit Canada.

And with the center of the system forecast to make landfall in eastern peninsular Nova Scotia and Cape Breton Island around 9 am Saturday, the possibility of downed wires and trees, flooded roads and closed stores meant many people spent Friday scrambling for supplies.

One staple in great demand is fuel. Most area service stations had constant lines as motorists waited to top up their tanks. The exercise requires patience.

“It took me forever to get gas,” said Ann Marie Quirk, who also stopped by the No Frills store to pick up a few extra items.

“The first few gas stations I went to were closed and when I finally found one with gas it took me almost another hour to get it. At first, I didn’t think the storm would amount to much but now with what I’ve been hearing I thought I should stock up with gas and stuff from the grocery store.”

At various times throughout Friday, area service stations ran out of fuel with the telltale orange cones blocking access to the empty pumps. However, the tanker trucks that supply the gas stations were kept busy as they too tried to keep up with the demand.

“We haven’t run out yet, but we’ve been really busy all day,” said Broadway Auto service station manager Kevin Campbell.

At the same time, the parking lots of food stores across the municipality were packed as shoppers dashed the aisles looking for those last-minute items.

One of the most visited aisles was the one with the beverages. By Friday afternoon, bottled water was mostly sold out in most area grocery stores.

Deepe Nair, a student and restaurant worker from southern India, was disappointed with the bottled water shortage. But instead of going home empty-handed, she opted for one of the few remaining water cooler-sized bottles.

“I’ve been here for only a year and this is the first really big storm and we are not sure what to expect – I hope everything will be okay,” said Nair.

Snack food aisles were also well-depleted by Friday afternoon as residents, perhaps influenced by the social media craze over ‘storm chips’, stocked up on munchies to help them make it through the storm.

Another popular last-minute, pre-storm activity was the securing of lawn, deck and patio furniture along with any other loose objects that might become victim to the extremely high winds forecast for the region.