The inaugural Clipper Events Knox-Johnston Cup took place at the weekend with some incredible conditions and an atmosphere to match. The flagship event saw fifteen yachts race around the Isle of Wight, with teams consisting of a real mix of participants, led by professional sailing staff, a third of the staff being female. From Clipper Race alumni, their family members, future Clipper Race Crew, to corporate team entries and those wanting to get out on the water for a memorable weekend of exciting racing and a fun filled sailing experience.

Designed to put the fun back into big boat racing, the Knox-Johnston Cup included a day of training followed by a race around the Isle of Wight, featuring some of the tactical aspects of the Clipper Round the World Yacht Race: a Scoring Gate, a Sprint and a Joker, where teams could opt to double their points on a Leg of the race.

Making the most of the September sun on Saturday, participants got to grips with their yacht and forged their teams, before a social evening of food, drinks and music in Cowes, Isle of Wight. A beautiful sunrise was the reward for the early Sunday morning line slipping, and after final preparations, sail plans were chosen and jostling began for favorable positions on the start line formed off the Royal Yacht Squadron Flagstaff and the white line on the orange diamond on the Castle. At 0810 BST, the race management team overseen by Sir Robin Knox-Johnston himself got the first Knox-Johnston Cup underway.

Speaking from on the water on Sunday as the race started Sir Robin Knox-Johnston said: “Seeing the fleet is a fabulous sight, isn’t it? Having met all of the crew last night, the enthusiasm is there. It’s a glorious day for sailing and racing, so they’re having a great time. It’s so good to see all of our yachts out together.”

It was an upwind start, with a North Westerly breeze blowing around 10 knots, making for perfect conditions leading to a clean start for the iconic fleet, made up of nine Clipper 70s and six Clipper 68s. Says Mark Light, Clipper Race Director: “The winds were fairly light at the start, but with the ebb tide the Clipper Race fleet looked majestic as they headed down to the Needles on starboard tack.”

Knotting Wrong, a team of Clipper Race friends, family and supporters, racing on board a Clipper 70, led by Race Skipper Ian Wiggin and First Mate Maisie Bristow, was first across the start line, setting the tone for the rest of the race. Shortly followed by, with a mere half a boat length between them, Kerrera Marina and WTC Supporterssecond and third to cross the start line respectively.

Leg 1 of the Knox-Johnston cup was a race from the start line in central Solent to a virtual gate off the Needles. When it came to playing a Joker, 13 teams opted to use it on this first stage, which paid off for Knotting Wrong as it held its lead from the start to win Leg 1 and secure the maximum 30 points. WTC Supporters improved on its starting position as it took second place on Leg 1 with Northern Powerhouse also moving up the ranks to take third. 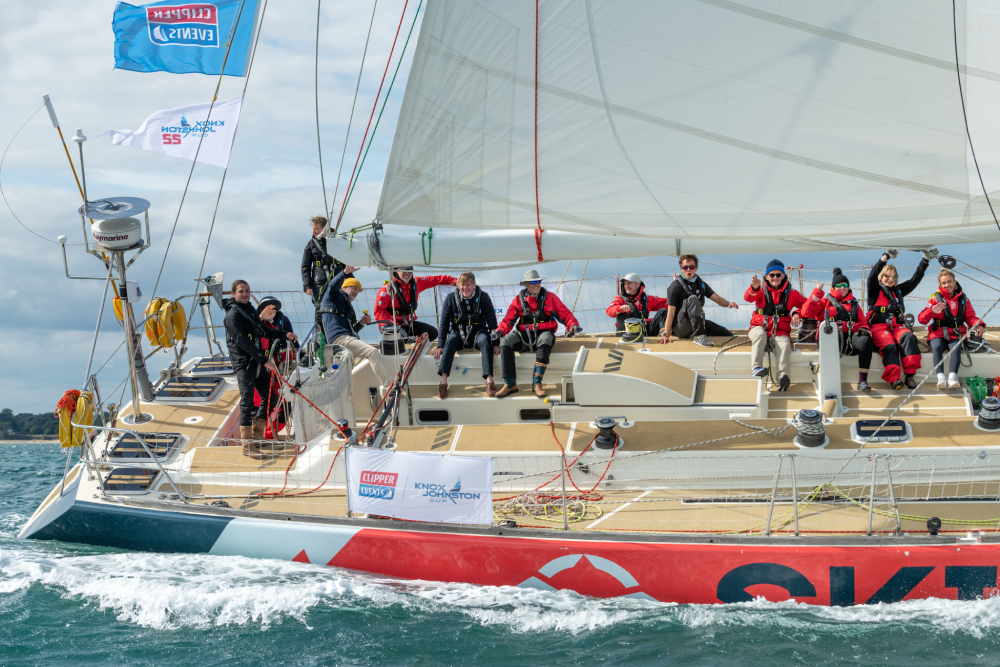 Leg 2 was a timed sprint between mandatory virtual gates at the Needles and St Catherine’s point. Main sails were eased and sail plans chosen carefully for this downwind section of the race. Speeds slowed as wind speed dropped but it made for some very close racing, with only 31 minutes separating the fleet on elapsed time. The fastest time, by 23 seconds, was Mission Performance with a time of 2hours 35min 09sec, followed by Knotting Wrong and 2017-18 Alumni. The fastest Clipper 68, only 11mins slower with a time of 2hours 46min 08sec, was Spirit of Oban. Two teams opted to play their Joker for Leg 2, which they were DLS Innovations and Northern Powerhouseto double their points for this leg.

The final stage, Leg 3, was a race from the gate at St Catherine’s to the finish line in an area off Bembridge Ledge. This stage also included a Scoring Gate, which was placed off the fastest route and interestingly no one was tempted by the bonus points on offer. As the fleet rounded the south east corner of the Isle of Wight it was close hauled racing once again and participants got to experience life on an angle as the fleet powered towards the finish. Mark Light, Clipper Race Director, commented: “Once around St Catherine’s Point, the southernmost point of the Isle of Wight, the full effect of the flood tide helped the fleet and with an increase in wind up to 12 – 15 knots, the yachts were blasting their way up towards the finish line off Bembridge Ledge, east of the island. 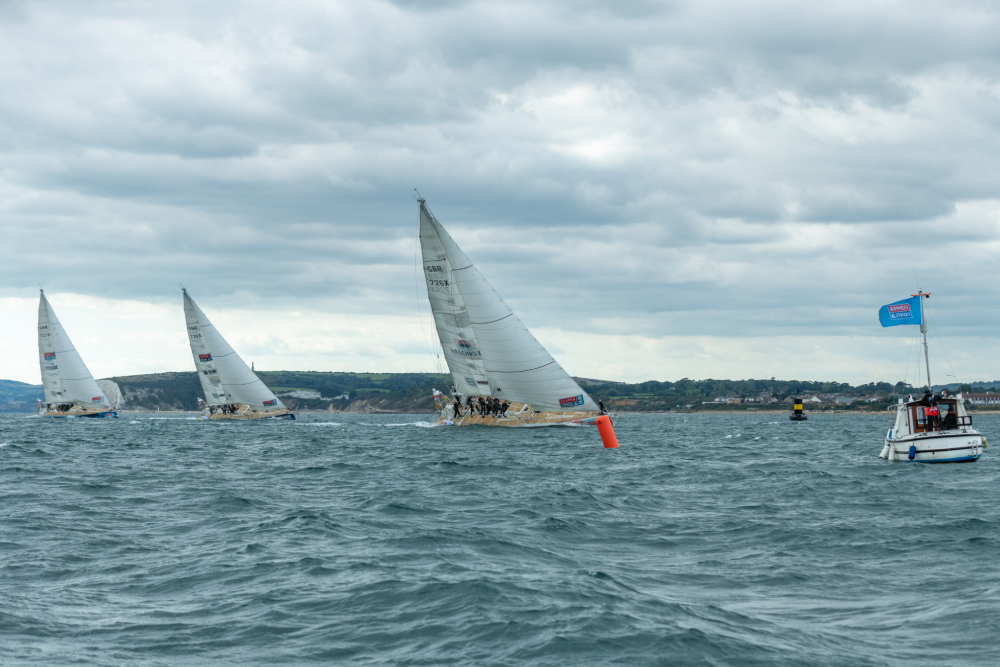 “The finish was spectacular with each team under full sail, power-reaching their way towards the line at almost 10 knots speed over ground (SOG) and crossing under the watchful eye of Race Management. A fantastic first Knox-Johnston Cup race was fully enjoyed by all crew and created a stunning sight in the afternoon sunshine.”

There were a lot of individual battles and a great competitive edge throughout the six hours of racing. There were a maximum of 63 points on offer in the Knox-Johnston Cup, and some fantastic matched racing which saw 2017-18 Alumni, Kerrera Marina and Mission Performance finish within 30 seconds of each other, and Spirit of Oban and Tenacious finish within 1 minute of each other. 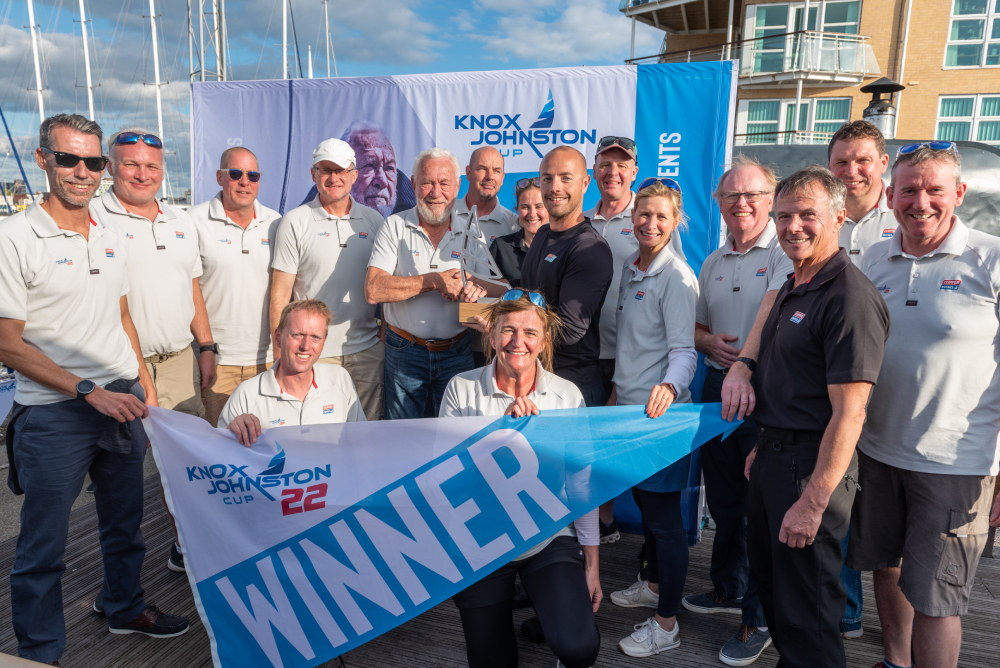 Taking the win and awarded the first ever Knox-Johnston Cup trophy was Knotting Wrong, Northern PowerhouseSkippered by James Finney followed in second position and WTC Supporters led by Dan Jones clinched third place in a close-matched battle for the podium.

Following the prizegiving ceremony, Sir Robin commented: “I’ve had a great time watching a lot of people having a superb experience. The atmosphere has been so good. It’s been a lovely mixture of alumni crew, people thinking of joining the Clipper Race, or who have booked for the next race, corporate guests and people getting together who haven’t seen each other for a long time getting out on the boat and sailing together again. They’ve been saying how nice it was and how much they’d enjoyed it.” 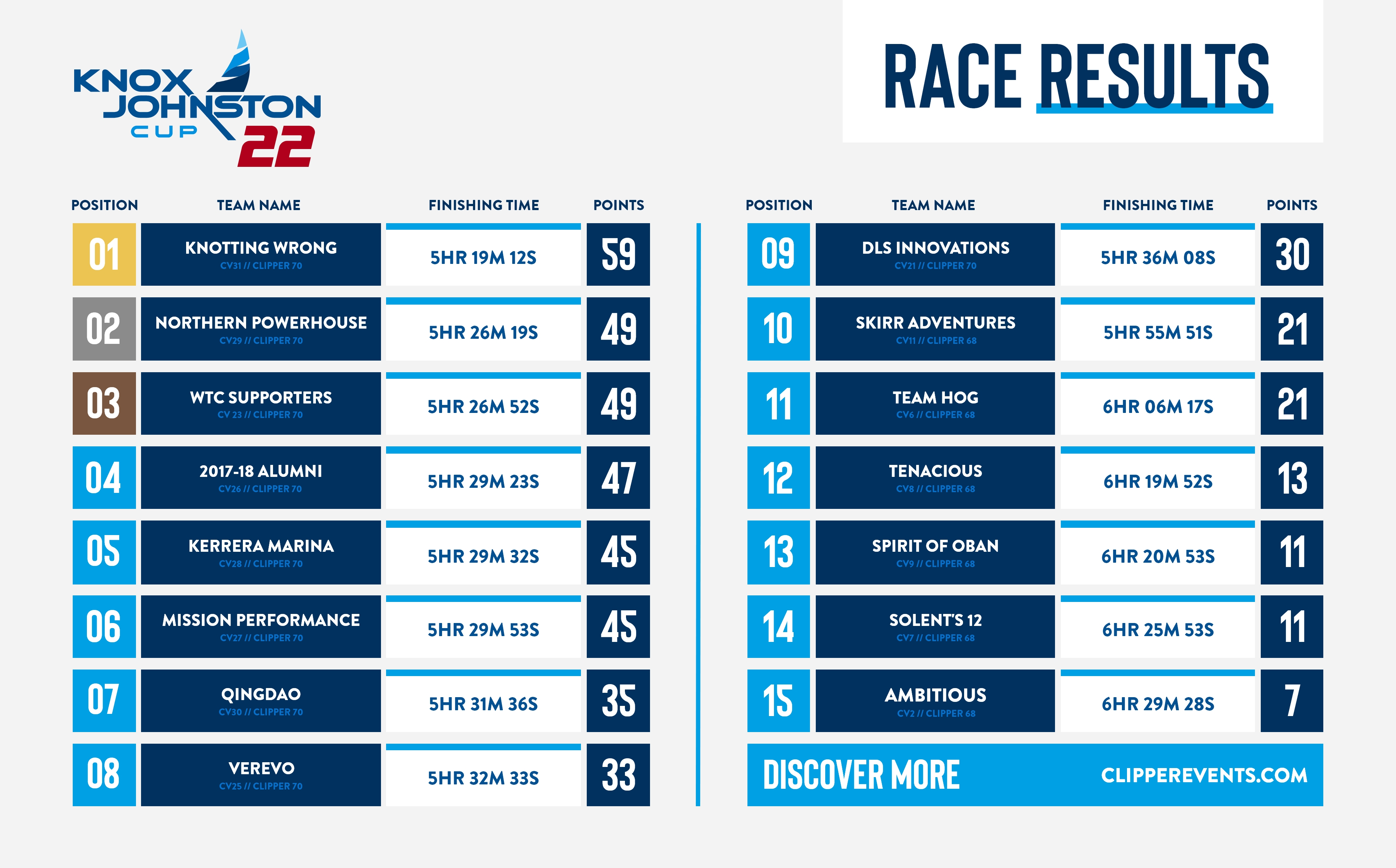 Find out more about Clipper Events at www.clipperevents.com.