Tough to say, easy to drink, Bruichladdich is the pour you want at a bar. Pronounced “Broookh-lahddih,” with a gentle scrape on the k, it’s a deeply satisfying go-to that punches well above its price point. It’s also an innovator; every step of its existence has been a daring move into new territory.

The company’s roots run back to the mid-19th century—and so does its original production machinery, still in use today. The Bruichladdich distillery has changed hands over the course of the 19th and 20th centuries, and even stopped production for a brief hiatus in the 1990s. It was revived in 2001 by two former wine merchants who were inspired by the distillery’s Victorian-age machinery to make whiskey the traditional way: with real ingredients, made by local people, and all on the island of Islay. Under the guidance of master distiller Adam Hannett, who experimented with and refined the whiskey’s timeless recipe, Bruichladdich has redefined Islay Scotch whiskey and preserved the success of the distillery for generations to come.

The Classic Laddie, Bruichladdich’s signature spirit, entered the barrels in 2001 as a nimble, nuanced, and defiantly unpeated single malt that bucked the expectation of typical Islay smokiness. Then Bruichladdich threw a left hook by distilling heavily peated Port Charlotte that same year, proving it could craft that way too. By 2002, Bruichladdich began experimenting with the limits of peat and distilled the legendary Octomorearguably the peatiest Scotch ever produced.

Bruichladdich’s philosophy is that, in whisky, terroir matters as much as age; the company has even begun to conduct clinical studies with barley from different parts of Scotland to determine which produces the best flavor. (Those findings are still pending in oak barrels, but they are expected to be delicious.) 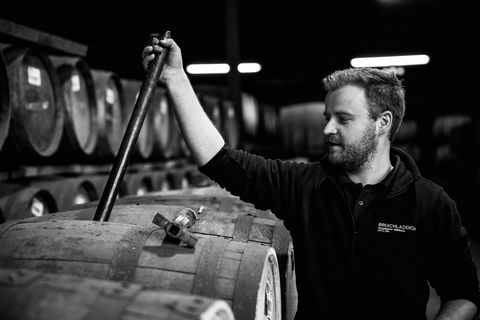 The distillery relies on its connection to the land and the provenance of the whiskey’s raw ingredients; they are not simply looking to use commodity barley that is grown for yield over flavor. Bruichladdich sources much of its barley from farms in the windswept, oceanic climate of Islay. In fact, more than half of Bruichladdich’s single malts are made using grain grown by 19 local Islay farmers. The remainder of the barley used is sourced directly from Scottish farmers across the country.

The company’s focus on terroir extends as far as its warehousing and bottling: Bruichladdich bottles all of its whiskeys on site, cementing the distillery’s well-earned reputation as a maverick producer. Bruichladdich is the only major maker that distills, matures, and bottles their liquid all on the Scottish island of Islay, despite the knowledge that, by law, companies only need to distill in Islay in order to be considered Islay whisky. Their ethos is that, to be a true islay whisky, a distillery should produce as much as possible on the island itself in order to create jobs and opportunities for the community. Bruichladdich is the largest private employer on the island.

While 40% ABV is the minimum requirement for Scotch whiskey, Bruichladdich bottles up at 50% ABV or higher, the optimum strength for flavor. There’s no chill-filtration or artificial color here, as the distillery would rather offer you complexity of flavor rather than be held up to the light for clarity. 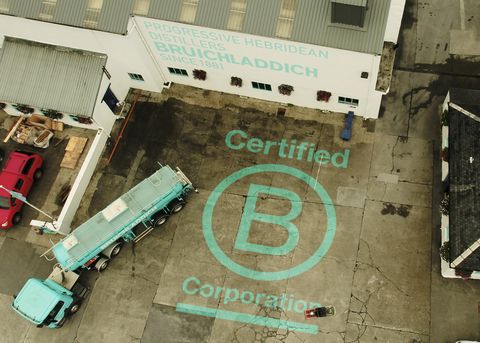 Along with peak flavor, another priority for Bruichladdich is transparency. Each bottle’s label discloses as much as possible about its distillate. In the spirit of this transparency, Bruichladdich is a certified B Corp, meaning that the business meets the highest standards of verified social and environmental performance, public transparency, and legal accountability to balance profit and purpose. As Scotland’s first B Corp-certified distillery, Bruichladdich aims for quality via accountability at every level. It seems like every year the company announces a new move designed for ethical conduct: Carbon-reduction initiatives, employee profit-shares, auctioning off bottles to help sick children, hosting creators and companies to boost the local economy. All of which means you can feel good about drinking Scotch that does good—and tastes great.

Finally, look at those bottles. Where other brands stick to Gaelic designs and genteel days, this Islay boldly stands out with gold or silver set starkly against monochrome black or aqua. The Classic Laddie‘s blue bottle is inspired by verdigris, the color of oxidized copper, a beautiful patina of rough-worn experience over an enduring, versatile metal. It invites Bruichladdich drinkers to raise a glass to express ourselves confidently and truly, even as we change to weather the world around us.