He told A Current Affair host Tracy Grimshaw that although he has known the Queen for a long time he didn’t expect to get the invite.

“I was quite surprised and taken back,” Hayes said.

EXPLAINED: What we know about Queen Elizabeth II’s funeral

The horse trainer said he was only a young boy when he first met the Queen, during a visit and lunch she had with his parents.

She had come to take a look at a stallion his father owned called Without Fear.

“She came to my parents’ property at Lindsay Park and I opened the door for her when I was 13 and she was visiting our property,” he recalled.

Following that encounter he came to train for the Queen when her racing manager John Warren thought a difficult horse might be best trained in the country with Hayes.

READ MORE: Day-by-day guide from now until the Queen’s funeral

“So he gave me a call and asked if I’d like to train this horse on behalf of the Queen,” Hayes said.

Hayes said after getting that “exciting” opportunity, he had many interesting conversations with Queen Elizabeth II.

One of the more interesting ones came after one of the horses he trained, Bold Sniper, was last at the Bart Cummings Melbourne Cup qualifying race.

He said he was horrified by the outcome and went home feeling very flat, until he got an unexpected call from Buckingham Palace.

“I went shhhh to everyone and I had a pulse on my neck and she went through to the library and she answered; she said ‘hello David tough day at the office’?” Hayes laughed.

“It put me at ease right away and we had a lovely conversation considering the horse came last.”

Hayes said he told the Queen what he thought had gone wrong including the use of pacifiers which were placed over the horse’s eyes.

He said the Queen responded saying: “Well that certainly worked,” with a chuckle.

He said the horse went on to win after that conversation which was one of “his great thrills” and the next conversation he had with Her Majesty was much easier.

The horse trainer said he went on to have other encounters with the Queen including an invite that came along when he was at Royal Ascot, where he was invited to have tea with Her Majesty.

He said he always felt so honored every time he had the chance to either speak to, or spend time with the Queen and he was saddened to hear that she had passed away.

“If you weren’t a royalist and you met her, you would soon become one,” he said. 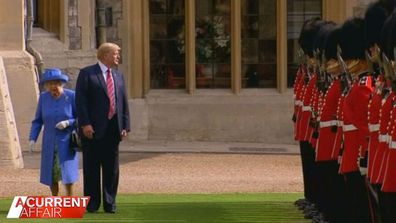 World leaders who bungled their meetings with the Queen

Queen Elizabeth II was the “people’s Queen” and during her 73-year reign, Her Majesty also met a series of presidents, prime ministers, celebrities and superstars.