This post was co-authored with Bethy Leonardi & Harper Keenan

In 2016 and again in 2021-22, a wave of anti-trans legislation surged throughout the country. In 2022, lawmakers in more than 35 states introduced legislation that targets trans and nonbinary youth, attempting to prohibit their full participation in school sports, as well as their access to trans-affirming health care, gender-segregated school facilities like locker rooms and bathrooms. , and accurate documentation that reflects their self-determined gender. Each new week sees more of these bills become law, including legislation passed in Florida, Utah, and Iowa in March 2022 that harms transgender students and legalizes anti-trans discrimination.

Republican governors in Utah and Indiana vetoed anti-trans sports bills this spring. Although the Utah legislature overrode the Governor’s veto, these gestures offer a small ray of hope in an otherwise dismal year for trans youth. In Texas, trans kids and their families are fighting to access transgender-affirming health care after Governor Greg Abbott’s executive order that threatens to pursue child abuse charges against any adult who provides youth access to this health care. We explained how harmful this is in a February post.

Transgender and nonbinary students regularly experience challenges in trying to navigate school environments (for example, see What do teachers need to support trans students? and In support of our trans community). This creates unstable ground that trans students must walk every day, and schools are often painful places for these youth. The 2019 GLSEN National School Climate Survey reported that 56.9 percent of LGBTQ youth experienced verbal harassment and 21 percent were physically harassed based on their gender expression. Results from the 2015 US Transgender Survey indicate that 17 percent reported leaving a K-12 school due to the severity of mistreatment. Trans and nonbinary students experience high rates of sexual assault (17 to 25 percent) and higher rates of sexual assault when schools have restrictive policies regarding restroom and locker room access. At school, 70 percent of trans students avoid bathrooms because they feel unsafe or uncomfortable, 60 percent were forced to use facilities that did not match their gender, and 75 percent felt unsafe because of their gender expression (MAP & GLSEN, 2017).

Public school leaders and educators are pushing back against these attacks and affirmatively embracing schools’ potential to heal. In Texas, for example, the Superintendent of the Austin Independent School District affirmed her support for annual Pride celebrations in schools in direct defiance of guidance from the state Attorney General. In Colorado, the Boulder Valley School District celebrated the 10-year anniversary of its adoption of Guidelines for Supporting Transgender and Gender Nonconforming Students. The district’s leadership has rejected fearful complaints about instruction about transgender people in its schools. In fact, a watershed Title IX guidance issued at the end of the Obama administration pointed to Boulder as a model district that has incorporated long-term professional learning for its educators in partnership with local experts at CU Boulder’s A Queer Endeavor.

Similarly, California enacted the School Success and Opportunity Act (AB 1266) in 2014, which provides districts with guidance on several key elements of trans-supporting schools: how to protect trans student privacy in school record systems, dress codes and sports participation, and how to promote effective communication between educators to ensure trans students’ full and equal participation in school. These are models that other states and districts can learn from to fix anti-trans schools.

In our new brief published by the National Education Policy Center, we present a summary of research about trans youth and their experiences in schools. We also offer recommendations for how to improve school environments through policy and practice. For example, instead of responding to widespread attacks that seem to keep allies and advocates for trans youth on the defensive, we encourage policymakers and administrators to ask what schools can do to support all students, rather than regulating who they are allowed to be.

To improve schools for trans youth at the start of a new school year, we must take action now. 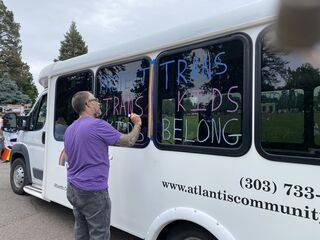 Additional policy advocacy ideas are also listed in the full brief. Trans youth need support from all of us—and together, we can build schools that do more to support all children as they are.